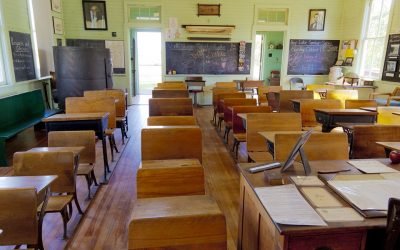 After 15 years working in educational publishing and ed-tech, I did something today I have never done. I was the acting principal at a public elementary and middle school in Jersey City through the “Principal for the Day” community program that pairs business owners in the area with local schools.

The principal I was paired with gave me only two pieces of information that I needed to prepare: park in her parking spot, and wear comfortable shoes. I had no idea what was in store for me.

Yesterday started with a staff medical emergency with EMT coming into the building right as the kids were getting settled into their homerooms, and the day didn’t let up once. I learned that all JC schools offer breakfast to all of the kids, and learned about the importance of this because otherwise some kids simply wouldn’t eat. Apparently Mondays is difficult as some kids say they ate little over the weekend, so breakfast and reduced lunches are critical. Some kids live in shelters off and on. The involvement of parents varies widely.

One teacher who has only three students in his class because the kids have behavior issues was in the office at 9:15 AM saying the two kids ran out and were running around the school. The 5 security guards who are there everyday and all video cameras had to look for them. One of the kids was to be sent home. His mom was called at 9:15 and she didn’t show up until 2:00 after multiple calls saying her child was having a really bad day and it digressed into him hitting a security officer and biting a teacher.

When she finally showed up, angry at the school for bothering her because “during the day he is their issue” (as she said in previous incidents) he was in a secluded room that was away from the other classrooms with his teacher and security guard. They were trying to calm him down and reason with him. As soon as he saw his mom he started crying and she went right up to him and hit him. Right in front of all of us. A report needed to be filed for family services. It was heartbreaking. It wasn’t even over then. A little second-grade girl was crying in the bathroom because her friends called her ugly at lunch. One girl says a boy threatened to rape her. He said he didn’t and she assaulted him. More reports filed. More parents called. One boy was running around his classroom until security came because he couldn’t sit still (this is common for him)…It was one thing after another.

And yet. This principal. She didn’t sit down once. She went into every class and talked to all the kids. She knew the names of every student (and there are over 500). She held a professional development meeting to start the day with her teachers about how the students deserve their absolute best and chastised those who weren’t being fair to their students by not updating their lesson plans and being on top of their game. Every day. She was in charge of everything in the school and made about 1000 decisions throughout the day with no hesitation and completely kept her calm while dealing with things I don’t think I’d have the strength to handle. When I asked how she did this every day she just said “The kids. I do everything I do for them.”

I have been in tears on and off since leaving school yesterday afternoon. I can say I am passionate about education and I am, but I recognize it has been far easier for me. Private schools and a family that values education, to start. This group of amazing people – the Principal, the Vice Principal, the Student Care Team, the counselors – the teachers – are giving everything they have in a tough school to give these students every opportunity that they can. It was the most inspiring day I have had in a very long time. I have always appreciated educators but today gave me a glimpse into a kind of school I have never attended and I am in awe of their love, their passion and their unwillingness to give up on these kids…

To my educator friends, thank you. I thought I had some idea. I didn’t. What you do is so critical, and I wish more people could see more closely what your everyday looks like. You are amazing.